How Celebrities Have Taken Advantage of The NFT Space

On May 3rd, 2014, the first-ever NFT was minted. It was minted by digital artists Anil Dash and Kevin McCoy and called Quantum. The NFT was a short clip of the wife of Kevin McCoy, Jennifer.

From 2014 til recent, the NFT space has grown so much. McCoy later minted this video clip on the Namecoin blockchain and sold it to Dash for $4, but now some NFTs are being sold for thousands and even millions of dollars- with the most expensive NFT sold for $91.8 million (The Merge).

According to Sellbitcoins.Africa, a Non-fungible Token, is a unique digital token which can serve as a certificate of authenticity and proof of your right to own and display the art on your digital wallet.

Because these pieces are unique, it creates scarcity which in turn adds to the value for NFTs.

NFTs can be anything digital; music, drawings, videos etc.

According to a report by NFT data company Nonfungible.com, since 2021, the measure of trading of NFTs rose to over 17 billion Dollars. And even though the second quarter of 2022 witnessed a massive decline in NFT sales caused by the fall in the crypto market, it has proved to be just a “phase”, and cryptocurrencies have a bright future.

It doesn’t stop at just buying and owning NFTs. Some NFTs also give you access to some unique features and advantages.

How Celebrities Have Taken Advantage of The NFT Space

NFTs are more than just digital art pieces, celebrities from both the African and western scenes are jumping on NFTs, and it’s great to see.

Some have even gone more than just selling NFT pieces for their profit; they’ve managed to help others with this.

The popular host raised over $33,000 for a food-relief organisation by selling NFTs of a bad drawing of her cat.

The Canadian singer and songwriter used his takings from his NFTs to support young artists.

Because of the complete freedom and right of ownership of NFTs,  musical artists have also taken advantage of them.

Hip-Hop Legend Snoop Dogg also got in on the NFT craze. “A Journey With the Dogg” features Snoop Dogg’s early memories and art inspired by the NFT movement, including an original track named “NFT”, which became an instant classic. He mentioned that a portion of the proceeds will support young, emerging artists in the crypto space and Snoop Dogg’s Youth Football League.

Now, coming to Nigerian artistes, we have previously discussed Nigerian celebrities who are killing it in the NFT space but let me tell you about someone new, BNXN fka Buju. BNXN fka Buju released an NFT collection called Heads By BNXN.  He expressed on Twitter that if you own this NFT, you automatically have access to his shows anywhere in Nigeria. 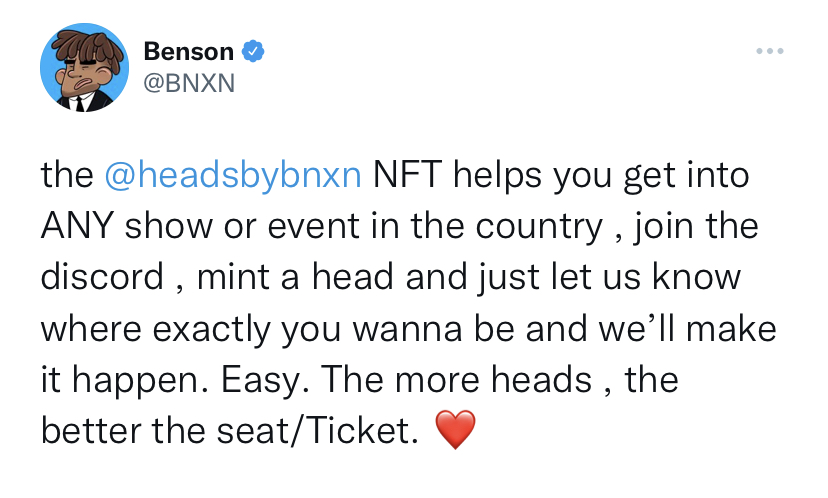 As mentioned earlier, it is more than just owning NFTs as new opportunities and advantages are added to the space daily.

Despite the setbacks, the NFT world is growing, and the world is adapting.

The NFT space is looking bright as more creatives, celebrities and influencers are hopping on it, and we are excited to see where it leads.

All NFT projects Need A Community, and Here’s Why
NFTs

Tanto Olalekan-Ekundayo - September 23, 2022
2 mins read
Is It True That NFTs Can Make Anyone Rich?
NFTs Opinions